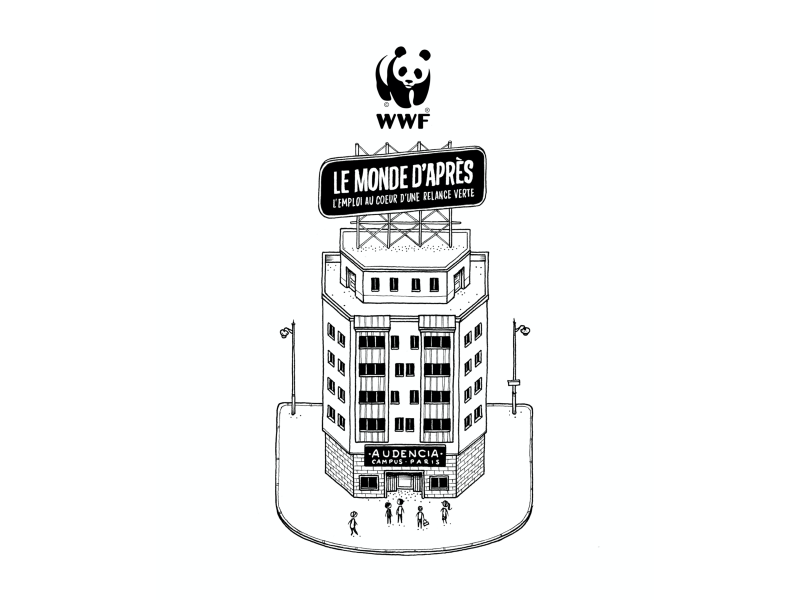 Next World: Employment at the heart of a green recovery

On October 15, a conference co-organized by WWF France and Audencia took place at our Paris campus and in distance, followed by several round tables and testimonies from economic players.

Inaugurated by Inès Boppe, Economic Relations Officer at WWF France, this event allowed Pierre Cannet, Director of Advocacy at WWF France and Alexis Gazzo, Partner at EY, to present the results of the WWF study: "World after: Employment at the heart of a green recovery".

This report tells us that by 2022, a green recovery plan could support more than 1 million jobs (full time equivalent, FTE) in the sectors of energy renovation, renewable energies, sustainable transport, organic agriculture and sustainable tourism.

In addition, the whole territory could benefit from this recovery plan, with more than 80% of the jobs supported being located outside Île-de-France.

During the two round tables, two topics were discussed:

The first round table moderated by André Sobczak, Academic and Research Director at Audencia, highlighted the initiatives of Bouygues Bâtiment France Europe as a company generating jobs in France and Pure and Paint, a young French brand of vegetable-based paint made from 98% natural raw materials and committed to local production.

The second round table, moderated by Lucie Smith, Head of Economic Relations at WWF France, presented several major French groups, including Carrefour on the development of organic French legume chains, Audencia on the development of agricultural professions and the challenges of training, and Danone's Ecosystem Fund on projects related to the protein autonomy of livestock farms.

These two round tables concluded with a closing word from Marie-Christine Korniloff, Deputy Director for Relations with the Economic World at WWF France, calling on companies to commit to an ambitious ecological revival anchored in the territories.